Basavakalyan Engineering College has been Established with the unique goal of transferring the youngsters into focused, responsible, commited, dedicated and confident professionals in the desired field. To achieve this, BKEC has provided for the finest teaching minds, whose guidance is reinforced with decades of teaching experience, national, international exposure and understanding. Well designed learning spaces set in a secure and serene 30 acre campus and excellent facilities make life at BKEC a truly stimulating and rewarding experience. Basavakalyan is a historical town of Bidar District in Karnataka state of India. During the 12th century, it was the capital of the kingdom of Sri Bijjala, who belonged to the dynasty of kalchuri Chalukyans. Lord Basaveshwara, a pious personality known for his generosity was the benevolent prime minister of the kingdom. He carried out here an unprecedented revolution for establishing a society free from exploitation and discrimination on account of caste, religion, language and gender. For him, compassion was the foundation of religion, he tirelessly worked for the establishment of a welfare state.

Soon his name and fame spread to different parts of the Indian peninsula like Tamil Nadu. Kerala, Maharashtra, Orissa, Gujarat and even to far as Afghanistan and Sri Lanka were inspired by him and his mission, Men, Women and even kings were drawn to this place where they practiced simple life by adhering to the philosophy "Work Is Worship" these truly pious people were called SHIVASHARANAS. Lord Basaveshwara established for the first time real democratic religious parliaments known as Anubhava Mantap. It is here, the Shivasharanas carried out the democratic exercise of sharing their experiences for solving the problems of the society; Kannada language attained its zenith of glory during this period. The democratic movement led the development of "VACHANA SAHITHYA" a profound form of literature in Kannada. Today, it is most valuable literature which has all the solutions to our present manifold problems, if one truly followed it. Thus Lord Basaveshwara is hailed as the first revolutionary thinker and social reformer of modern India.

It is here in the 14th century, Raja Bagh Sawar, a noted Sufi saint spread the message of communal harmony among all communities. The holy Sadguru Sadanand Swamy math has been also contributing greatly for love, harmony and peace among different communities living here.

Basavakalyan is today the most important commercial place, with population of nearly four lakh. It is a multi-lingual and multi-religious town, known for harmony ad peace. It only shows the influence of the message of Lord Basaveshwara and his followers still in abundance. 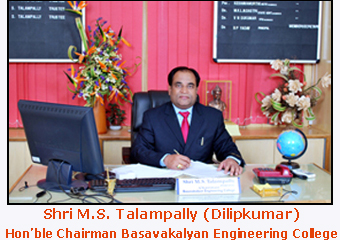 The Indian Higher and Technical Educational System is said to be the biggest and the best in the world. Indian Scientists, Technocrats and Researchers are always in great demand both within and outside India.

My vision for the college can be summed up by the following lines from Rig-Veda, Lead me from the Unreal to the Real, Lead me from Darkness to Light, Lead me from Mortality to Immortality With best wishes.

NOT APPLIED FOR ACCREDITATION BY NBA